Japanese language values feelings and it is not limited to onomatopoeia. In many situations, Japanese people use sensuous language to describe their emotions or circumstances.

One thing that surprises foreigners,

is the difference between language spoken by men and women.

Of course Latin derived languages such as Spanish have masculine and feminine nouns and adjectives (There is even a neuter gender in German).  Nobody, even Westerners can really explain why there is such a difference of men and women in the description of things. It is an utterly bizarre grammatical rule.

Anyway, in Japanese, the speech pattern is associated with the gender of speaker. 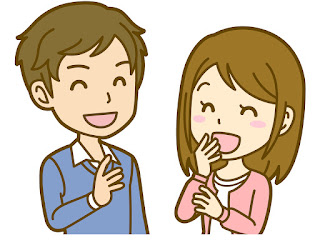 
Moreover, there's a surprising abundance of ways to call a person (personal pronouns) in Japanese.

The words a man uses to call himself (masculine first person pronouns),

And the words a woman uses to call herself (feminine first person pronouns),

Of course there are enormous variations in the second or the third person pronouns, and Japanese people carefully distinguish these subtle differences and enjoy their conversations.

Not only that, many pronouns have changed throughout history, as you can find the old "he" (anokata) has changed to "you" (anata), or "I" (onnmae) has became "you" (omae)", Japanese is a very imaginative language.

Furthermore, there is a esoteric honorific language in Japanese.

It expresses a form of respect by subtly changing or using different verbs to people who are older or superior to you. For example, the verb "iku (go)" could be "ikareru", "oiki ni naru" and "irassharu", and each form may be further transformed to different expressions. It is hard enough for Japanese people to  find the proper usage, so it would be even harder for foreigners to master.

This is because Japanese language reflects the hierarchical thinking that underlies in our society, and it has a fundamentally different sensibility from the equality-oriented Western societies. In other words, we Japanese are quite concerned about our own gender, age, or social-class of people around us, and therefore we carefully choose the words we use in daily conversations.

You can't learn a language without understanding the culture of the country.

Next time, 6 th,   Chapter 1  What a mysterious Japanese!

I am going to deliver  part 5. " Mixed four types of characters ? "

See you next time !!


◎  If you want to read this blog in Japanese, click here  ↓