Let's talk a little bit about colour this time.

As you may know, one of the things that surprises foreigners when they come to Japan is our Japanese people's strange sense of colour. One of the first things they mention is the question of traffic signals on the roads.

Why do Japanese people call traffic lights "aka, ao, kiiro"(red,blue,yellow)?
They are not "ao"(blue), they are "midori"(green)! 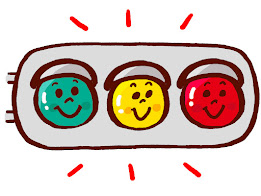 Yes, they are green. But even schoolteachers tell children to “Cross the blue light!”. However, this does not mean that the majority of Japanese people are colour-blindness. They are in the habit of routinely referring to green as "blue".
It is not only the colour of traffic lights.

As in the old song “aoi sanmyaku (blue mountains?)”, they often refer to the fresh green of the mountains as “ao ao (blue blue, or verdant?)”, or the green apples as “aoi ringo (“blue apples?),  or the green juice as “ao jiru”, or the caterpillar as “ao mushi, or the green shiso or green perilla as “ao shiso” or “ao jiso”. They are obviously be green. When it comes to “ao ao to shita midori (blue blue green, or blue blue lush green?)”, sometimes seems as if it might be a writing error.
Perhaps the basic colours for the Japanese people were the four colours, red, blue, white and black. (if you consider black and white as colours). And since there were no other names for the colours, it is thought that some objects or phenomena in nature were used to describe each colour.
For example,
The “midori-iro” (green) is the colour of “midori” (shoots and young branches), the “murasaki-iro”(purple) is the colour of “murasaki” (perennials of the purple family), the “daidai-iro”(orange) is the colour of “daidai” (citrus fruits of the tangerine family), the “cha- iro”(brown) is the colour of tea(“cha”) stained cloth,  and the “akane-iro” is a subdued red colour, dyed with the roots of the red pine tree “akane”, a medicinal and dye plant.
(However, there are various theories as to the origin of the word “ki-iro”(yellow), and it is still not clear what “ki” was.)


Nevertheless, do you still think it's okay to say the signal is "green"?

Yes, but “midori” is not a colour name. It is not only the colour of shoots and young branches, but sometimes it is also the name of a person or a place, so you need to add “iro”(colour) after it to be precise. This is cumbersome and cannot be used at a moment's notice.
But that is not the only reason.

The Japanese people probably recognised colours according to these two groups. And “aka”(red) and “ao”(blue), including “shiro”and “kuro”(white and black), all have short two-syllable names, are easy to pronounce and easy to communicate in case of urgency. Kindergarten teachers also said, "Let's cross the “ao shingou”(blue signal!)” rather than "Let's cross the “midori-iro no shingou” (green traffic light !)”. It is easier to ensure the safety of the children. The other colour, besides red and blue, I think they used “ki-iro”(yellow), which is also shorter than “orenji-iro”(orange). This is just a guess on my part… 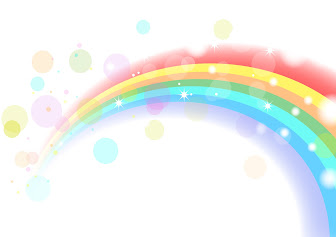 Now, let's look at this a little more grammatically!
White, black, red and blue - these four are the names of traditional Japanese colours. And at the same time, these nouns also change into the "original adjectives" that I mentioned earlier. These are “shiro-i”(white), “kuro-i”(black), “aka-i”(red), “ao-i”(blue). There are basically only four "original adjectives" for colours. There are no “midori-i” or “midori-iro-i” (green), “daidai-i” or “daidai-iro-i” (orange), “murasaki-i” or “murasaki-iro-i”(purple). This is probably because “midori”, “daidai” and “murasaki” were not originally colour names.

However, there is an exception to this.

These are “kiiro-i”(yellow) and “chairo-i”(brown). I don't know what kind of campaigning these two colours have been involved in (laughs).  But they seem to have recently joined to this four-colour "original adjective".（Yes, the word is alive!)


So what about the other colours?

They are all nouns, so to connect them with another noun you have to add the particle “no”(of). The following are some examples. “midori-iro-no-sutando”(green stand), “murasaki-iro-no-nekutai”(purple tie), “kon-iro-no-kutsushita”(navy blue socks). However, “midori-no-sutando”, “murasaki-no-nekutai”, “kon-no-kutsushita” sometimes work too.
In the case of those two new student colours, “ki-iro-no-kasa”(yellow umbrella) and “cha-iro-no-boushi”(brown hat), using nouns as well as adjectives, are also correct.

(Perhaps you noticed that  “ki-iro-no-kasa” is also okay for “ki-iro-i-kasa”(yellow umbrella), but “ki-iro-i-himei”(yellow scream) cannot be “ki-iro-no-himei”.  I've mentioned this a bit before, this is the subtle difference in nuance between "adjective" and "noun".  (I hope you can understand this, even if only somewhat sensibly!)

Some colours are not only "original adjectives" but also "copy adjectives". These are only four basic colours: “shiro”(white), “kuro”(black), “aka”(red) and “ao”(blue).  And It is used especially when these four colours are extremely dark.

The four colours are “mas-shiro”(pure white), “mak-kuro”(pure black), “mak-ka”(pure red) and “mas-sao”(pure blue), which for some reason change as "copy adjectives". In short, these are accompanied by the〈copy adjective〉peculiar “na”, to describe the following nouns, like “mas-shiro-na-yukiyama”(pure white snowy mountains), “mak-kuro-na-inku”(pure black ink), “mak-ka-na-uso”(pure red lies) and “mas-sao-na-umi-no-iro”(pure blue sea colour).
————  How did you feel about the various colour adjectives ? ————
Now let's review the《adjectives》 for a moment !!

In Western languages such as English and Spanish, the difference between nouns, adjectives and adjectival verbs is not always clear. In Japanese, however, it is important to clearly distinguish between them and understand them. In particular, Japanese "original adjectives" change like verbs, so pay attention!!

Below are some 《 basic mistakes 》 that students in Japanese classes often make.
(It was very cold yesterday.)
❌   kinou wa totemo samui deshita.
(This book was not so expensive.)
❌   kono hon wa sonnani takai dewa arimasendeshita.


Of course you wouldn't make these mistakes, would you?

〈32〉  ◆ chap 3 "the Japanese expressions & their secrets!”
part 16.   Easy and convenient
How to turn verbs into nouns