part 1. The mystery of Hiragana !!


In previous articles, we have roughly looked at the characteristics of Japanese and its differences from Western languages. Now, let's take a look at the mystery of the parts of speech that make up the Japanese language as we call it "Mystery Theater". In fact, there are a lot of mysteries hidden in the Japanese language. 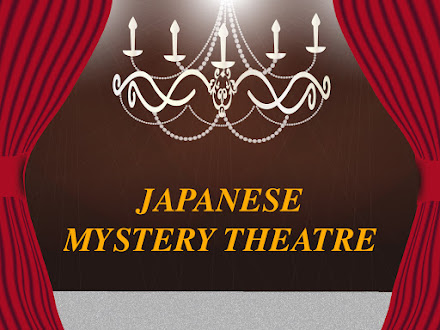 Let's start by analyzing the "Hiragana" that is the basis of this!

After accepting Kanji from China, Hiragana and Katakana were developed as Japan's own characters, and were used to learn the pronunciation of Kanji. And more than that, they were indispensable characters for writing the Japanese language, which has a unique grammar that includes changes in verbs and adjectives.

But, as I mentioned before, Katakana, which came to be used for writing foreign languages after the World War II, has now lost its grammatical meaning. Therefore, in order to challenge the mysteries of Japanese grammar, we must approach the mysteries hidden in "Hiragana".

Hiragana consists of 50 characters (?), from "A I U E O”、to "W A I U E O" and "N" (a very strange character not counted as one of the number of characters, so Hiragana is 50 characters in total). And the same letter appears three times for "I" and "E" and twice for "U"

The reason for this, as you may know, is that in the past, there were letters with different pronunciations. I think my grandfather also pronounced the "I" in the "WA" line as if it were "WI". But now that the difficult pronunciation and letters have disappeared and simplified, the only ancient letter that remains is "Wo". That pronunciation has also been changed from "WO" to the same as the "O". (My grandfather was definitely saying, (WO).)

But what were the "I" and "E" in the "YA" line and the "U" in the "WA" line for, and what kind of letters were they used for? May be encyclopedias were arranged in the order of "IROHA" instead of "AIUEO" until the end of the Tokugawa shogunate(〜1867), and then rearranged by incorporating foreign vowels such as "AEIOU", if so, it is not surprising that some letters are missing. 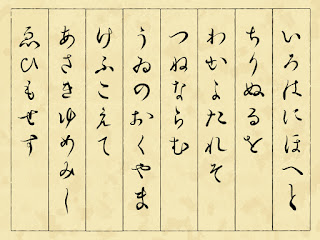 (There's no end to the mystery of Hiragana. For those who are interested, please try to find out!)

△△ Three Hiragana characters that are the key to learning Japanese △△

By the way, when I teach Japanese grammar to foreigners, I often pick up three letters from 50 "Hiragana" and explain them. They are "HA" and a "HE" and a "WO",

The pronunciation of the "HA" is usually (HA), but changes to (WA) when it is placed after the subject. Why on earth? One theory is that the pronunciation of some letters changed during the Heian period, but again, this is not exactly known.

However, the one letter after the subject is a major feature of the Japanese language.

In Japanese, you must grammatically add one of the following particles to the subject: "HA" (WA), "GA" or "MO". That's why you can quickly find out what the subject is in Japanese, and you can also take it everywhere. Even if the subject is at the end of the sentence, we can easily recognize it.

Languages which require a particle after the subject are, of course not Western languages, but probably almost non-existent, with exception of Japanese and Korean (?). But it's quite useful.

So what is the difference between "HA"(WA), "GA" and "MO"? Quite simply, it depends on the question.

★   And if there are other Maria, then she will answer「私もマリアです」"I am Maria, too."

Yes, the general is "HA (WA)", the emphasis is "GA" and the "too" in English is "MO". However, the distinction between "HA(WA)" and "GA" is not as simple as it sounds. I'll go into more detail later, but ultimately, it's also a kind of variation of the Japanese expression that enjoys a little bit of difference.

The "HE" is also usually pronounced (HE), but it changes to (E) when it is placed after a destination or object. This is also present in Western languages and corresponds to "to" in English. You use it like "日本へ〈NIHON E (to Japan)〉" or "父へ CHICHI E (to father)", but also you can use "NI" （に）instead of "E" （へ）in the same way. The "NI" is more common, and the "E" is often used when things are a bit poetic or uncertain. (The only letters whose pronunciation changes are "HA"&"HE" and no other.)

私は長いこと、兄にも姉にも会っていません。
( I have not seen my older brother nor my sister for a long time.)

あなたは日本へ行きましたが、韓国へも行きましたか？
(Did you go to Japan but also to Korea?)

As I have already mentioned, "WO" is the only remaining ancient character in modern Hiragana. The pronunciation is now the same as the "O". It was left for one and only purpose: to put it after the object word. And this, like the "WA" and "GA" after the subject, does not exist at all in Western languages.

In English, the object of "pen" in "I have a pen." has nothing but an infinitive article (which does not exist in Japanese),  but in Japanese, as you see, you need a particle 「を」, after the object.

In Japanese, when a verb expresses an action on something the item or person is usually the "object" and must be suffixed with "O". The only other thing you could put after the object is the "too" in English "MO", so you only have these two choices. (But sometimes "WA" is used when the verb is in the negative or for emphasis.)

私の父はベンツを持っていますが、先日ポルシェも買いました。
(My father has a Benz, but he bought a Porsche too the other day.)


If you understand the above three letters, it's like you've already mastered the basics of Japanese grammar. If you know the words, you should be able to read, write, and speak simple sentences such as the following---