So far we've discussed about the peculiarities and wonders of the Japanese language, as well as basic grammar. These are the framework or skeleton of the Japanese, and now you have a rough idea of the language spoken by the Japanese people. Congrats on your completion of the "basic" section!   From here, it's time to move on to the "practical part" !

Let's start with these words, which always appear in English studies. When you translate them into Japanese, the sentences become very long, such as "...shinakutewa naranai" or "shinakutewa ikenai". Why is that? What secrets are hidden there?

It seems this is because of the cultural differences between Japan and the West.

It is often said that the West is an "individualistic society" and Japan is a "feudalist" or "collectivist" society. While Westerners tend to focus on themselves, Japanese tend to think and speak within the context of the people around them and the social hierarchy.

This may be why Japanese people have a habit of asking for permission from those above them when they want to do something. Let's examine them one by one while looking at the table below!

Questions and answers for the Japanese when they want to do something.

"kekkon shinakuccha!!"(I have to get married!)

For example, let's think about the verb "to call (by phone)"!

2) is "denwa shitewa ikenai (ikemasenka)? 《I must not call you? / Isn't it OK to call you? 》". It is a question of whether a certain behavior is not allowed, and when the other person says "hai, denwa wo shitewa ikemasen(kyoka saremasen. )《"yes", you are not allowed to call!》" it can also be an affirmation of that. If you are negative to the question, change the "Yes" in response to "No" and say, "iie, denwa shitemo ii (desuyo)! 《"No", you can call me !》”

3) is "denwa shinakutemo ii (desuka)? (Don't I have to call you? / Is it OK to not call you?)". It's a question that asks for permission for the negative form of a certain action. And It can be a word of approval as "hai denwa shinakutemo ii (desuyo)! ("Yes", you don't have to call me!)". But if you deny that permission, you would change the "Yes" in the next 4) reply to "No". Go on and look at 4).

("...shitemo" and "...shitewa" in the table are examples of changes in the case of the verb "suru (do)". Other verbs, such as "kaku (write)", you change them like "kaitemo", "kaitewa", "kakanakutewa", along with the past tense or negative form of <informal>. 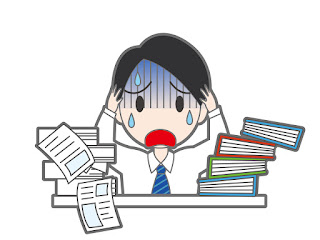 "hatarakanakutewa ikenai !!(I have to work!)"

You've already noticed that, haven't you?

When I tell my Japanese language students about this, they are surprised and react like, "Why are you using such a cumbersome phrase !?

In fact, there is no negative element in their "must" and "have to", but rather a strong will to do something. It is very important to understand each other's thinking when learning a foreign language.

(btw, there is also an expression "surukoto ga hitsuyou da (need to)", which is not a double negative. But it has a slightly different nuance than "have to" in Japanese).

Now, let's get it straight!

...and each of these can be used as a question and an answer.

〈 The words inside of ( ) are formal type 〉

So they have two or four variations. Japanese people unconsciously use these expressions in different ways, but the meaning is almost the same. If you want to make it shorter, you can change "...shitewa" to "...shichaa", "...shinakutewa" to "...shinakucha", "...sinakereba" to "...shinakerya", or something more casual.

Yes, Japanese is an odd language. But you already know what to say, don't you? The Japanese have always enjoyed the nuances in every little variation. I am sure that new expressions are being created at this very moment. Let's enjoy these changes together!.