One of the most common phrases used when talking to friends, lovers or people you have never met before is

Because when you are trying to get to know someone or want someone to get to know yourself, your own and that person's tastes, interests and preferences are very important factors.

It's the "ga" that is worth noting!

Again, consider the contrast between English and Spanish.

For example, “watashi wa nihon ga suki desu” is said in English as "I like Japan”.

I often use Spanish when explaining this riddle. This is because most of my students are Spanish and they all know Spanish, even if they are from other countries.

So how do you say "I like Japan" in Spanish?

It is actually quite different from English. They say ”Me gusta Japón”. The “me gusta”(gustarse) in this, is called a recursive verb, meaning "something fascinates me". (The “me" is the “me" in English, although pronounced differently)   Therefore it means, "Japan fascinates me".

This really annoyed not only the Japanese students at the Spanish school, but also the English-speaking students.  The word that is supposed to be the object has to be the subject. It means that the verb has to be changed to something else...   However it was a difficult task to do it in Spanish, where the verbs change dizzyingly in every person. （sweat!)

Let's look back and verify!

According to my dim memory, most people used to use “wo” when I was a child. However, as the years went by, it seemed to change to "ga" before I knew it. But I never really thought about why.

Then, decades later, when I came across the Spanish language, I caught a glimpse of the Japanese imagination which changed the “wo” into "ga”, in the curious Spanish expression "Me gusta Japón (Japan fascinates me)".

In other words, “watashi wa nihon wo suki desu” is a general expression such as "If you ask me a question about the country of Japan, I like it, not dislike it. But “watashi wa nihon ga suki desu" means  "I like Japan compared to other countries", which is a further intensification of the speaker's intention.

Thus, between "Me gusta Japón" and “watashi wa nihon ga suki desu", even if the sentence structure is different, there seems to be some kind of commonality. I sometimes joke in response to a student's question, "Maybe the Japanese are getting closer to the Spaniards and their expressions are becoming overdone! ".

Because Spaniards always say "Un segundo" (Wait a second!) instead of “Wait a moment!”(chotto matte!). But by the time you say that, one second has already passed. Haha, in fact, you have to wait at least five to ten minutes! 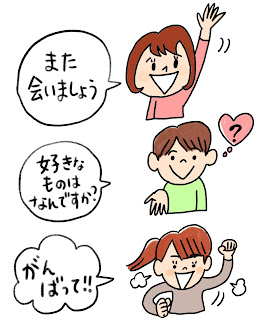 Joking aside, let's consider this a little more seriously!

As a matter of fact, the English verb "like" is equivalent to “konomu” in Japanese. Therefore, ”I like Japan" can be translated grammatically as “watashi wa nihon wo konomimasu”. However this expression is a bit old-fashioned and not often used in everyday life.  (If I had to guess, it would be "I prefer Japan" in English.)

For these reasons too, it may have been easier to change "wo" into "ga".

Come to think of it, '“kirai(dislike)”(also a copied adjective) may be deliberately used more than “suki(like)”. For example, some people use this word with strong hatred like as “watashi wa gokiburi ga kirai desu!”(I hate cockroaches!), even though the insects are innocent.  Oh no, I made another joke.